It’s never too early to think about snow removal. We’re sure you’ve been there: maybe you put off the idea of snow removal too late and now you’re stuck with a driveway full of packed snow and you can’t get to work.

Or maybe you weren’t prepared to think about it all in the summer or fall, and now you’ve been hit with an early November snowstorm, so your business’s parking lot is absolutely covered.

It can be incredibly expensive to purchase your own snow machine, and a lot of the time a snow shovel just won’t cut it.

This is where we come in. It might sound strange because when you think of a landscaping company, you usually think of summer pool days, a blazing sun and green grass. But believe us when we tell you that we actually have the right snow removal equipment to provide the right kind of snow plowing near you.

If you do want to perform snow removal by yourself, though, don’t worry! We’re going to give you a list of the best snow removal tools and equipment, both commercial ones and ones for your home. 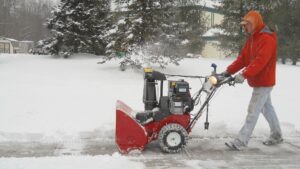 HOW DO YOU CHOOSE THE BEST SNOW REMOVAL EQUIPMENT?

When choosing the best snow removal equipment, there are a handful of things to take into consideration.

First, you need to figure out what size of a property you’re working with. If you’re looking for equipment to use for your home, how big is your property? If it’s relatively small, you probably don’t need to go out and buy a compact, commercial-grade piece of machinery.

But if you run a business that needs commercial equipment, you might consider the quality of the equipment you already have and if it’s going to fare well through the winter. You don’t want to have to keep going back to the same place you just plowed to follow up and repeat the whole process.

For example, if you’re new to this, you might want to start looking for a snow pusher attachment. It’s probably already compatible with a skid steer or tractor you own and it can make the whole process of snow removal more fuel-friendly and generally efficient. In this case, you would have to ensure that your attachment is the correct dimension for your existing equipment.

What would give you the most versatility and bang for your buck? This is an important question to ask yourself when you’re choosing, whether you’re looking to purchase equipment for your personal property or your commercial business.

We look at the online reviews for each of the tools we list for you below so that you can have a better understanding of what will work best for you.

Here we’re going to go through five of the 9 top snow removal equipment. These ones are ideal for your home.

We base our decisions of these being the best on the market on several factors, like Amazon user reviews and ratings and price weighed against quality, ergonomic value and ease of functionality.

Having a high-quality ice scraper can make all the difference in how comfortable you are at home during the winter. In fact, removing snow without even thinking about the factor of ice isn’t such a great idea. Think about it: have you ever shoveled your driveway then walked down it later only to slip because you forgot to use ice melt?

We’re sure you’ve had similar problems with your car in wintry weather. If you’ve ever brushed the snow off your windshield but had to wait for what felt like hours to defrost your car anyways, you know what we’re talking about.

There’s an easier way to get rid of the ice and the snow on your car without getting annoyed at how long it takes while you sit in a chilly driver’s seat.

That ease comes in the form of the AstroAI 27” Snow Brush and Detachable Ice Scraper. It is only about 14 dollars on Amazon and you can alternate between using the snow brush on one end and the ice scraper on the other. If you have someone else around, you can detach them from one another and divvy up the labor, too.

Assembly and detachment are both simple and it has an ergonomic, cushioned handle to avoid blisters. Since it’s over two feet long, you can easily reach across your car instead of walking around in the cold snow over and over again.

It has 76 percent five-star reviews with over 13.6 thousand reviews total, with users almost unanimously agreeing that it works as advertised.

If you’re a more DIY type of person and have a property where a standard snow shovel won’t do the trick, you might think you have to drive over to your closest hardware store and get the newest Home Depot snowblower or spend a lot of money on the most expensive John Deere snowblower on the market. Luckily, you don’t have to.

We recommend the Snow Joe SJ623E Electric Single Stage Snow Thrower. It is less than 170 dollars with a corded-electric power source so you don’t have to worry about burning through fuel. It also only clocks in at 34 pounds and can throw snow up to 25 feet.

Of all the finicky snow blowers out there, this one claims to be maintenance-free with the ability to move up to 720 pounds of snow per minute, and it comes with a halogen light so you can remove snow at any hour.

With almost 4.2 thousand reviews, 63 percent of them are five-star ratings with a lot of customers in favor of the ease of an electric snowblower.

Maybe you’re not comfortable using a snow thrower or you’re not ready to spend over 100 dollars on your equipment right now. If so, The Snowplow’s “The Original Snow Pusher” might be right up your alley.

It boasts a 24-inch wide blade with an ergonomic handle, simple design and ability to push, chop and scrape snow away from any surface for only 65 dollars. It’s also available in four other sizes so you can pick what width would be the best for your property. The blades are also supposed to self-sharpen, so you don’t have to really do any sort of maintenance with it.

85 percent of its 763 reviews give this snow pusher an overall ranking of 4.7 stars. Some of the reviews weren’t a fan of the assembly process, but overall it was lauded for its functionality and the fact that it doesn’t leave you with an aching back.

It’s hard to find the best snow shovel when you’re dreading all of the labor you have to put into using one. Fortunately, there’s a solution.

The Snowcaster 30SNC Wheeled Snow Pusher Shovel takes a simple approach to this problem by adding wheels to their shovel to speed up the process.

It’s a 30-inch shovel/snow pusher combination, and they claim that you can find uses year-round for it, like barn clean-up and miscellaneous plowing duties. The wheeled shovel also has a one-year warranty and a 10-minute assembly.

It has 1.6 thousand reviews and 74 percent of them are five stars. The most common complaint is that its 89-dollar price tag is pretty excessive, but that it works particularly well for light snowfall.

We already talked about the AstroAI ice scraper, but the SnoShark 2-in-1 Snow Mover and Ice Scraper is too good to bypass. While it might seem pricey at around 60 dollars, it extends to 39 inches and serves as both a snow mover and scraper to use for your car with an anti-freeze additive in the paddle.

It can be easily broken down to store anywhere. The 60 reviews leave it with an average 4.6-star rating, 78 percent giving it five stars. According to those reviews, you might want a different option to reach your roof if you drive an SUV. 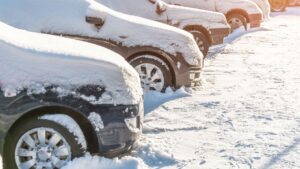 If you clicked on this to look for commercial snow removal equipment, you’ve come to the right place. Our last four recommendations are just for you.

Toro Dingo has a compact utility loader line, but now it also offers attachments with their four- and five-foot BOSS snow removal attachments.

They are made of polyethylene blades that are both lightweight and durable. They have a reversible cutting edge, which leads to a longer product lifespan. Its hydraulic 30-degree adjustment means there is no need for manual adjustments when you’re up to your knees in snow.

If you need more power in your snow removal equipment but still value clean emissions, the Kubota B2650 Cab Compact might be for you. It offers a liquid-cooled E-TVCS engine that results in powerful torque and low emission levels with a DPF Muffler.

Its new design also offers extra legroom, a broad view through its rounded glass and minimal noise when you’re inside the cab. Kubota provides you with a better all-around experience with the B2650 and its 12-volt charging socket and its air-conditioned and dust-resistant interior.

An excellent steer loader to think about when you want to get more use out of your equipment besides just snow removal is the Caterpillar 289D Compact Track Loader. It employs a vertical lift design, extended reach and suspended undercarriage to give you high levels of traction and stability.

The 289D also strives to keep you comfortable while you’re operating it, something that a lot of other steer loaders often overlook.

It has high work tool visibility and a high-quality and advanced display.

The Blue Diamond Skid Steer Snow Blower is specifically designed to be used for years with its high-quality specs. It features a high-pressure bypass relief system. You can choose the appropriate width to use as an attachment on the equipment that you already have to match your skid steer or compact loader capacity.

The lack of shear pins, its high-strength corner bracing and its heavy-duty polyurethane idler wheels give it a serious advantage as a snowblower attachment that you can capitalize on for your company.

If you are a homeowner looking for other tips, tricks and suggestions on home improvement and much more, check out our blog. Otherwise, instead of having to constantly type in “snow removal near me” into your phone at the last minute, contact us or send us a message today for a custom snow removal plan and snow removal services.

How Can We Help You?

Find out how you can get a landscape that supports your goals and a team of experts focused on you.