The team at Exscape Designs is excited to announce that the company has won an Honor Award from the Ohio Landscape Association (OLA). This award was given based on the work completed for a client with a complex water feature installation in Geauga County.

The project, forming a custom water feature in Chardon on a property with a large existing barn wall, presented several challenges for the Exscape Team to surmount. The home included a large property 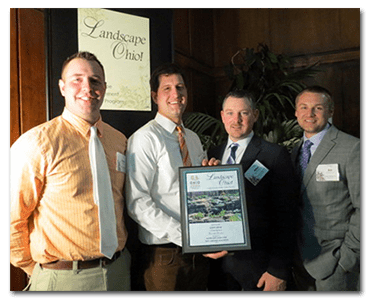 with an extensive garden and previously landscaped areas, which the homeowners wanted to finish with a quiet, reflective water feature area. Though the homeowners weren’t considering the use of the barn wall as part of the design, Exscape’s creative team felt that the existing barn wall was such a striking feature that it should be included as a focal point. Ultimately, the goal of the project was to provide the family with a quiet area they could gather as a group or individually to relax.

The size and complexity of this project is what made it striking and worthy of submission for an OLA award. The team had to work diligently and carefully due to existing landscaping that was not to be disturbed. After the design was completed, excavation began. Once the detailed excavation was completed, the work team installed rebar forms and then filled the metal with a slurry consistency of Shotcrete to form curvilinear walls. Once the base had dried, rock was added to finish the surface. The project used a stunning 80 tons of stone.

Exscape is thrilled to be the recipient of this peer award. The OLA submissions are judged by a three person panel of those who currently work in the landscaping industry. Highly competitive, the OLA only offers one Honor award per category with two Merits awards as the runners up.

How Can We Help You?

Find out how you can get a landscape that supports your goals and a team of experts focused on you.